Many expats follow the laws issued by the State of Kuwait and one day a new law is issued that makes everyone in great shock.

Today..Kuwait issues a new law that changes the status of all residents and expatriates inside and outside the country. Prateek Desai, one of the executives of the giant engineering firm Larsen & Turbo, has been in Kuwait for 25 years.

In a related context, he says that his future seems not guaranteed now, after the partial approval by the National Assembly of a law for expatriates aimed at reducing the number of foreign workers in Kuwait, as the draft legal and legislative committees in the National Assembly have ratified the draft law, but it will not take effect until after approval. The government is on it, but it is clear in the general situation that all sides agree.

On the other hand, if this happens, Desai and a large number among the 800,000 Indian citizens may be forced to leave Kuwait, it is reported that expatriates now constitute 70 percent of Kuwait's 4 million people. The new law aims to reduce this percentage to 30 percent.

In the same context, the Indians, who make up the largest expatriate community, are likely to be most affected by the new law, and experts say it appears that the reason for passing the new law is the slowdown in the Kuwaiti economy and the increasing demand for employment opportunities by Kuwaitis.

This is not all, as the local Kuwaiti media reported that Prime Minister Sheikh Sabah Al-Khaled Al-Sabah described the size of expatriate workers in Kuwait as a "major imbalance", adding, "We face a future challenge in facing this imbalance."

Everyone will be covered by the new law, in addition to the Indian expatriates, workers and employees coming from Pakistan, the Philippines, Bangladesh, Sri Lanka and Egypt.

There was a good follow-up from the government as the Indian government says it has begun talks with the Kuwaiti authorities on the matter.

Anurag Srivastava, spokesman for the Indian Ministry of Foreign Affairs said, "The Indian communities in Kuwait and other Gulf countries enjoy great respect and appreciation and there is recognition of the contributions of these communities, and we have expressed our expectations, and the Kuwaiti decision will take these expectations into consideration."

Desai added that it is not just a question of losing his job, but also of forcing him to return to India. 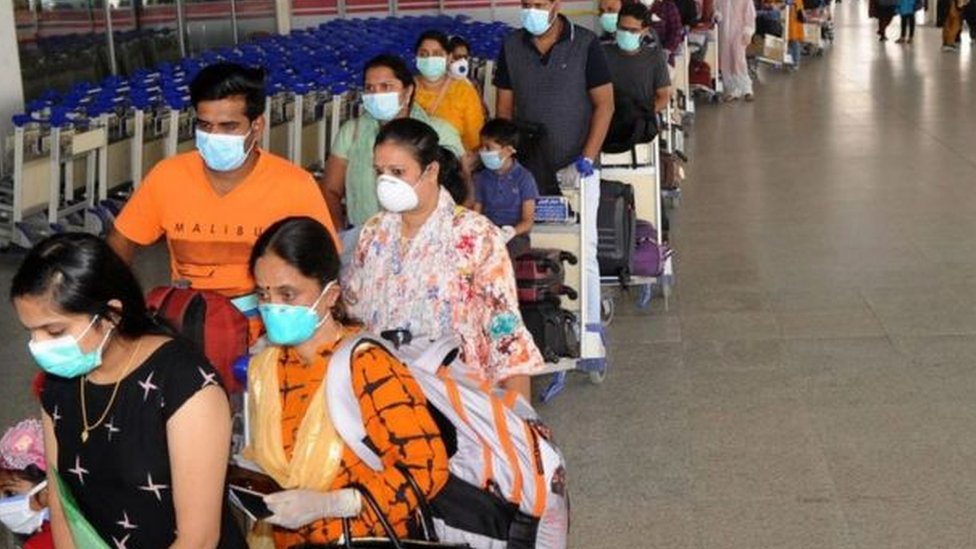 Does the new immigration law pay expats the price of the Corona crisis?

He stated that "when you reside in a country for such a long period, you will have emotional bonds with that country. It will affect me more emotionally than its physical impact."

He adds that Kuwait is one of the largest sources of foreign money transfers to India, as the Indians residing in Kuwait transferred about 4.6 billion dollars to their country in 2017, according to the Pew Research Center.

It is understood that around 300,000 Indians work in the domestic service sector in Kuwait as drivers, chefs and servants, and many say it will not be easy to fill these vacancies with local workers.

And he explains that it seems that the reason that prompted Kuwait to issue the new law is the collapse of oil prices in world markets, which had a significant negative impact on the country's economy, which relies mainly on oil.

In the same context, the draft law has now been referred to another parliamentary committee that will formulate a comprehensive plan to implement its provisions, and the Kuwaiti National Assembly is also awaiting the government's opinion on the matter, according to the English-language Kuwaiti Times newspaper.

But will the law be enacted and enforced? Many experts question it.

Finally, Dr. IK Pasha, a professor at the Center for Western Asian Studies at Jawaharlal Nehru University in Delhi, told BBC: "We have heard about this several times since the Indians began heading to Kuwait in 1972, so whenever oil prices drop, they try to reduce the number of arrivals. , And the focus is on Indians because they are the largest. "

It will be affected by the new law, in addition to the Indian expatriates, workers and employees coming from Pakistan, the Philippines, Bangladesh, Sri Lanka and Egypt
. Dr. Pasha added that the Indians contributed greatly to the construction of infrastructure in Kuwait, and they cannot be expelled from the country with such ease.

He said, "Kuwaitis cannot continue to enjoy the life they have created without the presence of expatriate workers because the Kuwaitis do not wish or hesitate to do many of the work undertaken by expatriates."

Dr. Pasha believes that if the migrant workers leave Kuwait, the pace of construction of infrastructure in Kuwait, such as housing projects, will slow due to the drop in oil prices and the spread of the Corona virus.

"Unskilled workers will be affected to some extent, but the need for this employment will continue in the long run in order to maintain the infrastructure," he said.

Others also believe that significantly reducing the number of migrant workers is not a practical decision.

"It is practically impossible to keep 200,000 Indians here and return 800,000 to their country," Caesar Shaker, a chartered accountant working for an engineering company in Kuwait, told the BBC.

"I do not expect this law to be enacted," he said. "The Kuwaiti government is very sensitive to the Indians and will not force them to leave the country."

But other experts say that the Kuwaiti government is under great pressure as a result of the escalating unemployment.

There are many Kuwaitis studying abroad who want to return to their country of work.

That would put many jobs requiring special skills at risk for expats, says Brian Thomas, an Indian legal accountant working in Kuwait.

"If Kuwaiti graduates do not find jobs in their country, where are they going?"

"They only want administrative jobs. You will not find a single Kuwaiti who wants to work as a technician. I personally work in the financial field, so my job is more at risk than other jobs," he says.

Tauranga secondary school most recent to watch understudies in restrooms

Australia Joblessness Drops as Half of Positions Lost Recuperated

Walk is 'D-Day' for emigrating South Africans and expats

Hundreds of whales die off the Australian coast

Gold Rate in Bahrain Today per gram in BHD

per gram.. gold price in Kuwait in Kuwaiti Dinar

Buy and Sell.. Today Gold Price in Oman in (OMR) Per Gram

The Saudi market is closing its dealings with an increase of about 0.32% on the Saudi Stock Exchange